How To Shoot A Handgun

by Aaron Ross
in Blog 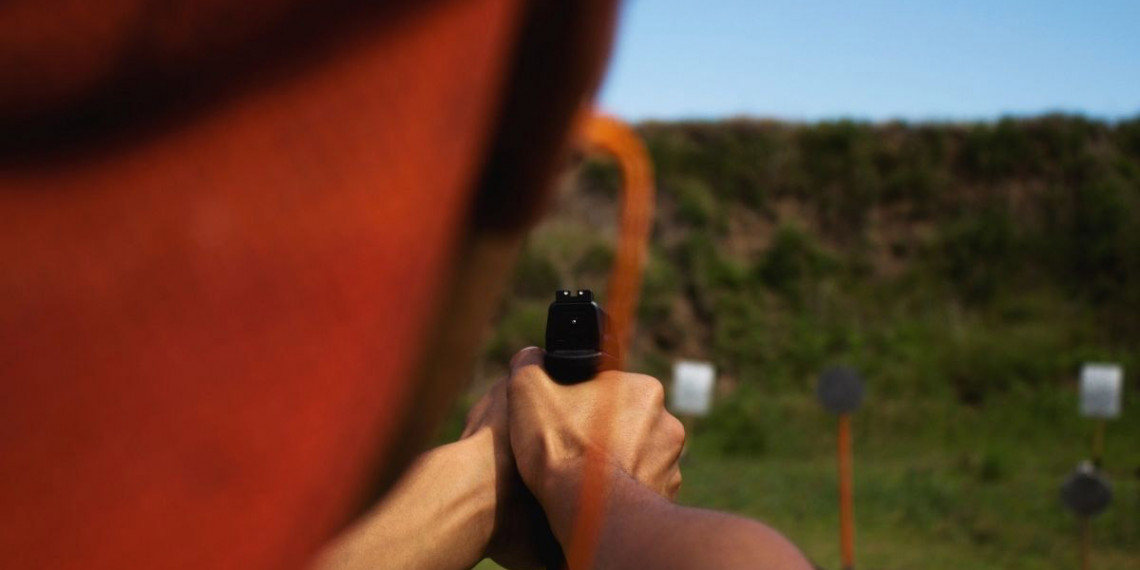 Shooting handguns can be both fun and challenging. It is a wonderful activity to do alone, or with a group of friends. Learning how to safely, and properly shoot will not only provide you with hours of enjoyment; it will also help you build confidence as you become more familiar, and comfortable, with firearms.

Luckily, it is not hard to get started and it does not require a lot of effort. However, there are a few important steps you must take to get the most out of your experience. Whether you have a lot of experience shooting handguns, or have never shot one before, the steps are all the same.

We have covered everything you need so you will know how to shoot a handgun. After reading this article, you will be ready to hit the gun range with confidence and have a good time. Because safety and fun are something that can, and should, go together.

Complete Guide to Shooting a Handgun

Local Laws and Where Too Shoot

Each country, state, and even cities, can have different rules and regulations. 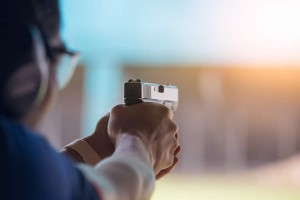 It is important to check with local, reputable gun dealers, or local law enforcement, to find appropriate, and safe, places to shoot. If you live in the city you’ll most likely go to a local gun range. If you do not have a range close by, you could also travel to one in a more rural area, where shooting is legal and safe.

Always remember the basics of gun safety. You must always treat the handgun as if it is loaded. Even if you know it is unloaded. Never point a gun at anything you do not intend to shoot. Only put your finger on the trigger when you intend to fire the gun. Always know what is behind your target. Never point, or fire, your handgun when someone is down range.

Anatomy of a Handgun

Understanding the basic anatomy of a handgun is essential to properly, and safely, using one. All handguns have the following parts.

There are two main types of modern handguns – revolvers and semi-automatics.

The first, and oldest, is the revolver. This handgun uses a cylinder with multiple chambers that hold bullets. As the trigger is pulled, the chambers rotate into alignment with the barrel. The hammer then strikes the cartridge’s primer. This causes the cartridge to fire the bullet through the barrel, and out the muzzle.

Semi-Automatic handguns are slightly different. The bullets are kept inside a magazine which is loaded into the grip of the handgun. 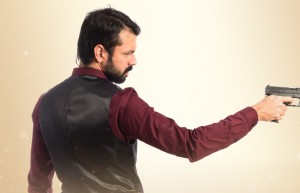 To load a bullet into the chamber of the handgun, you must first cycle it by firmly holding the grip with your dominant shooting hand. Then you will pull the slide backwards by firmly gripping the slide with your secondary hand and pulling back.

There are four main types of trigger actions. These action types determine how the handgun operates.

Now that laws, anatomy, and types of guns and actions are out of the way, lets talk about how to safely shoot your handgun. 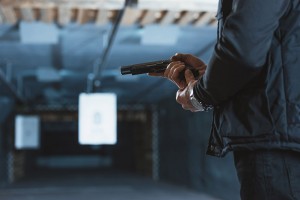 Once at the range along with your handgun you’ll need a few more items for a fun and safe experience.

Make sure you have good eye protection that is rated for firearm safety. This is very important because you never know what might happen with casings ejecting, or faults in the handgun itself. Good eye protection will help protect you against potential vision loss and should always be worn when operating any type of firearm.

You will also need good hearing protection. This can be something as simple as crushable foam ear inserts. There is also very good electronic hearing protection that will allow you to talk to others – but will protect your ears from the loud noise produced by gunshots.

Finally, you will also need to have some targets and plenty of ammunition. Targets can be anything from cans, bottles, steel plates, or paper targets; there are a lot of options available. However, depending on where you are shooting, the type of targets you can use may be limited. Indoor ranges will typically require the use of paper targets. Make sure you check with your range before you go.

Once you have your eye and ear protection on, and your targets out, you are ready to shoot your handgun. 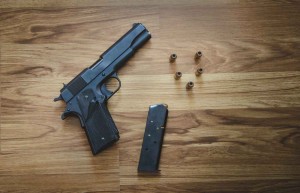 The first thing you will need to do is load your handgun. If you are using a revolver, you will pull the ejector pin, slide the cylinder out to the side, make sure the chambers are empty, and load new cartridges into the chambers.

If you are using a semi-automatic handgun, you will need to feed cartridges into the magazine and then push the magazine up, into the grip. Make sure that you give it a good firm tap, and a good downward tug, to ensure the magazine is properly seated. This will prevent feeding problems as you shoot the handgun. 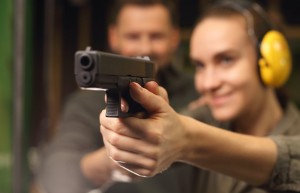 Finally, you will want to push your arms out in front of you, holding them out with a slight bend at the elbow. This will allow your arms to catch the “recoil” of the handgun as it is firing. You will then be able to quickly bring your handgun back down and onto the target for follow up shots. Do not lock your elbows, you want to allow your wrists and elbows to be able to absorb the recoil as you shoot.

The next step in shooting your handgun is to properly aim at your target. This is a simple, straightforward process. You will need to align the rear sight with the front sight. The rear sight will have a gap in the middle. There are usually two dots, one on either side of the gap on your rear sight. 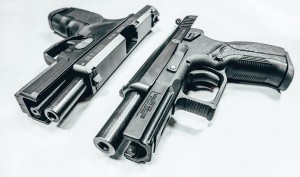