How To Shoot And Load A Shotgun

by Justin
in Blog 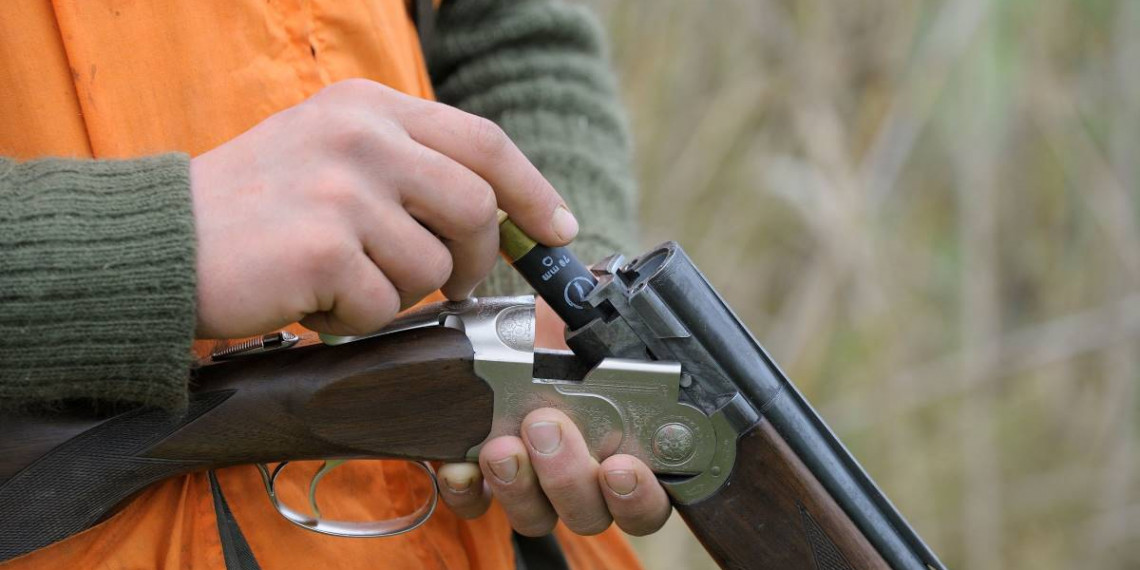 The word shotgun conjures up images of watermelons getting blown apart and overprotective fathers. Shotguns are synonymous with the Wild West, warfare, law enforcement, clay pigeon shooting, and hunting. But before you learn how to shoot and load a shotgun, you need to know the kind of shotgun you are shooting with, and the safety precautions to take.

Different shotguns get recognized by the gauge, barrel, and action. Each type has a unique trigger action and loading method. The size of the shot differs according to the gauge and barrel. Before you attempt to load you must learn safety, how to stand, and how to handle the weapon.

How to Shoot and Load a Shotgun

The shotgun has a fascinating history that goes back 100s of years. But the purpose of today’s article is to explain how to shoot and load shotguns according to the different actions and trigger types.

So, let’s jump straight in!

What Is a Shotgun

A shotgun is a smooth-barreled firearm used for short-range defense and hunting. It is favored for being easy to use, powerful, and efficient when targeting moving objects. They’re also called scatterguns. This refers to the effect the shot has after getting fired.

The main difference between a rifle and a shotgun is the barrel. A shotgun is smooth-barreled and a rifle has an inner wall with grooves (rifling). Hence the name, rifle. Unique designs accommodate the various types of ammunition. The grooves in rifle barrels cause the bullet to be propelled forward once the hammer strikes the firing pin. It spins the round, allowing for a more accurate shot.

Shotgun ammunition is called shot. The shot is made of lead pellets. They are spherical and different shotguns take different size pellets. The weight of the pellets determines the size and gauge of the weapon. The pellets can be made from various metals but lead and steel are preferred for both the weight and effect on firing.

Modern shotguns are available with rifled barrels, but the traditional ones are all smooth-barreled.

The Anatomy of a Shotgun

Before you learn how to shoot and load a shotgun you need to know your weapon. Shotguns are popular because they’re versatile, tough, and come with a wide array of modifications and tactical adjustments. But the basic anatomy remains the same.

Parts of the Basic Shotgun: Glossary of shotgun terms

Butt/Buttstock/Stock: The stock is the rear end of the gun. It offers structural support for the action and barrel. And lends support to the shoulder when firing.

Recoil Pads: Sometimes the butt will be fitted with a molded recoil pad. This is to absorb the impact of recoil and lessen the incidence of injury.

Trigger/Trigger Guard/Safety: The trigger releases the chain reaction that fires up the cartridge (shotshell). These components are part of the action. In modern shotguns, like the Beretta 692, you get selective, adjustable single triggers. In other models, like the Perazzi MX8, you get detachable triggers. The safety catch is essential when loading and unloading. It locks the barrel preventing any accident from releasing the trigger unintentionally.

Comb: This is a section of the stock where you rest your cheek when mounting the shotgun to shoot.

Loading Port/Ejection Port:  The loading port takes the rounds and the ejection port releases the spent shells. If the gun has been shot dry, it is possible to load a round from the ejection port.

Chamber: The chamber is the space where the round is loaded into. Also called the loading and ejection ports.

Barrel: The tubular metal pipe through which the pellets are propelled after the trigger releases the hammer, which starts the chain reaction and fires the shot.

Forearm: This is the part you grip with your weak hand, so right-handed shooters will grip the forearm with their left hands. With pump-action shotguns you’d use the weak hand to rack the action back after firing, in preparation to eject the spent shell.

What Are Shotguns Used For?

The likelihood of hitting your target increases when using a shotgun because the shot scatters. Because 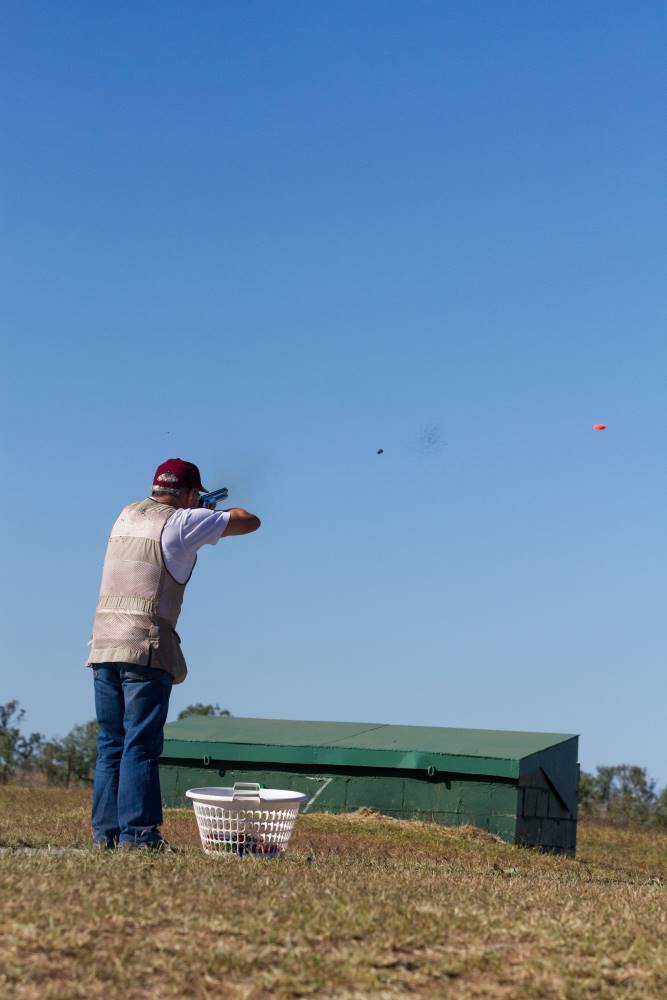 it’s used at short-range there’s more chance of getting results. So a shotgun is not as accurate as a rifle, but it doesn’t have to be. Also, loading a shotgun after every shot wastes time. The scatter effect from the shot ensures the target gets hit, rendering a second unnecessary.

Shotguns are preferred in the following situations:

Action: The action refers to the entire mechanism involved with the loading, firing, and unloading (ejecting spent rounds) of the weapon. You get pump-action, break-action, and semi-automatic action.

Lockwork: The action also houses the lockwork. The lockwork’s the inner workings responsible for igniting the cartridge once the trigger gets pulled. The trigger is also part of the action.

The trigger pulls are affected by the type of lockwork the gun has. You get a boxlock, which is internal, with a hidden hammer (referred to as hammerless) and a sidelock, that is situated outside of the action.

Boxlock shotguns are less complex in design than sidelocks. They are more durable and sturdy. But when learning how to load and shoot, you don’t have to understand the complexities and inner workings of your shotgun as much as you do the actions.

Pump-action: Pump-actions are single-barreled and hold multiple rounds. Below the barrel is a tube. This is the shotgun’s magazine. Over the magazine is a fore-end (forestock or pump). The forestock is the piece that you will slide, or “pump”, when loading and unloading.

Pump-actions are reliable and have boxlock inner workings. It’s a tough gun, well-suited to tactical situations, like riot control and military tactical operations. It’s good for home-defense and law enforcement.

With a pump-action you can only fire as fast as you can load (true for most shotguns). The more proficient you are, the faster you can load, shoot and reload.

Break-action: Shotguns with hinged breeches are double or single-barreled. The double-barreled models are either up and under (barrels are on top of each other). Or side-by-side. You can only shoot two rounds at a time, one from each barrel. These shotguns are used mainly for competitive shooting, clay pigeon shooting, and hunting.

Semi-automatic: The design of this firearm is the most complex, and therefore it is more likely to experience jamming than the other two. The semi-automatic is exactly that. It can fire a single round every time the trigger gets pulled. It automatically ejects and reloads the next round, in split seconds.

Shotguns are also categorized by the ammunition they take. The gauge of a shotgun refers to the weight of the lead pellets, in fractions of pounds. The barrel can take a pound of lead. So if it loads 12 shots it means each shot weighs 1/12 of a pound. And the gun is referred to as a 12-gauge.

The smaller the gauge the wider the barrel, and the more powerful the shot. And the recoil. A 20-gauge shotgun will take 20 pellets and have a smaller barrel. Less recoil means smaller framed individuals, and novices will be more comfortable with the 20-gauge. It gets used for small game, rodents, birds, and for shooting targets.

To increase the accuracy, you can insert a choke into the front end of the barrel (the muzzle). This alters the width of the barrel and influences the rate of spray.

Buckshot, birdshot, and slugs are the three types of ammo used for shotguns. Birdshot is the smallest in diameter. Buckshot is the regular pellets that get used for your 12 and 20-gauge weapons. And a slug is a solid, single pellet, good for bigger game, but also used by law enforcement and the military.

How to Load and Shoot Different Shotguns

Loading and shooting take skill and practice. Know the force of recoil and adjust your stance to accommodate. The way you mount the shotgun determines how your body will handle the impact from the recoil.

Before loading any shotgun, make sure you follow the safety guidelines above at all times. There are different methods for loading shotguns. It depends on the situation and the shotgun action. For example, if you are training for combat you must be able to:

But if you want to become a shotgun loading prodigy, getting into competitive shotgun shooting is the 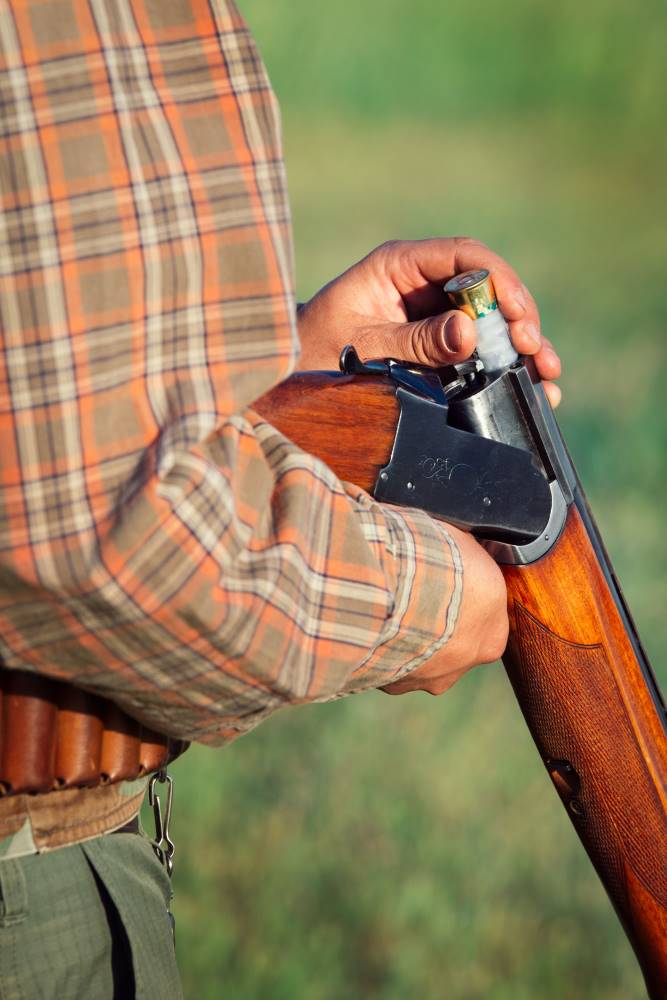 answer. Shotguns need to be tweaked for compos. The Browning B525 is a good choice for beginners though.

When you shoot competitively you will use several loading techniques. Start with the basic loads, but if you want to start turning heads, learn to perfect the quad load. It’s way faster than the tried and tested weak hand dual load.

For competition shooting, a larger loading port is needed for fast, clean loading. And special carriers store the cartridges. You can then remove two or four rounds at once. There are ways to do this fast and efficiently by using your thumb and fingers.

To pull them out in one motion, you place your thumb on the top of the cartridge and wrap your hand around four cartridges. With a swift motion pull all four off and bring them up to the loading port. Push and slide the first round in and repeat until all four cartridges are loaded.  The video clip below demonstrates how Nathan Payne dominates this technique!

How To Shoot and Load a Break Action Shotgun

Break action shotguns are hinged at the breech which is found at the backend of the barrel. To load you have to open the shotgun at the breech and insert two rounds, one into each barrel. The example below is based on right-handed shooters.

How To Load and Shoot a Pump-Action Shotgun

To load a pump-action, with an open chamber, first make sure the gun is pointing in the safe direction, that the safety is on, and your finger is straight against the action, above the trigger.

And there you have it!

As you can see, how to load and shoot a shotgun is remarkably easy. Once you have the hang of this you can move on to the more complex forms of loading and shooting. And this is where the fun really starts.

Serious gun collectors and competitors can have a field day, shopping for shotguns that come already equipped with features like:

Shotguns evolve constantly for the thrill and pleasure of shotgun lovers, But the classic shotguns will always remain close to the hearts of hunters, historians, and hooligans alike. The ease with which shotgun lovers can switch and change from old school shotguns to new and improved models so effortlessly is further proof that these babies ain’t going nowhere soon.

They remain dependable, durable, versatile, and relevant. Learning how to shoot and load a shotgun is child’s play and much easier than a handgun, thanks to the cutting-edge ingenuity and passion that goes into making these heritage arms indispensable, even in the modern world.

How To Build An AR-15 Upper Receiver

What is the Best Hunting Camo?

What is the Best Hunting Camo?