by Justin
in Guns 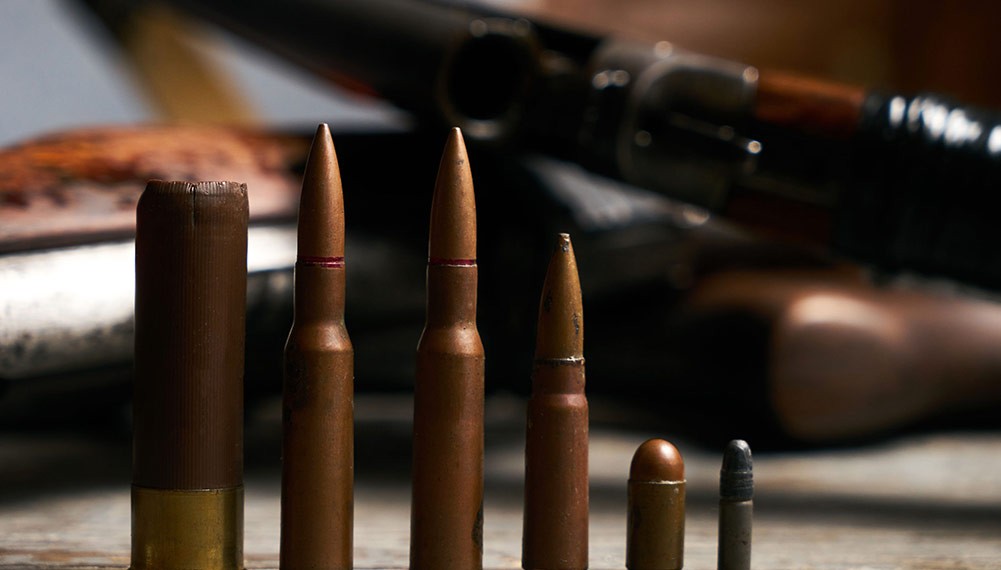 For the beginning shooter, few things can be more confusing than the distinction between rimfire vs. centerfire ammunition. So one of them fires from the rim, right? And the other fires from the center?

Yeah, that about covers it.

Finally, many states make distinctions between rimfire and centerfire guns, both in terms of criminal law and in their hunting regulations. For example, in many states, it’s illegal to hunt deer with rimfire ammunition.

So what’s the difference, and why does it matter? Let’s take a closer look.

Anatomy of a Bullet

So, a gun shoots bullets. That’s something everybody knows. But the bullet is only part of the cartridge you load into your gun.

Back in the old days of muzzle-loaded muskets, gun owners had to load several components into their firearm in order to shoot it. First, they had to load a measure of gunpowder. Then, they needed to load a bullet, with a wax paper wadding to form an impromptu seal and shield the barrel from scoring.

Finally, they needed to pour a small amount of primer into a pan in order to kick-start ignition when the hammer struck.

Loading your gun became easier in the early 1800s when rifle manufacturers started utilizing the percussion cap, which replaced the primer pan and allowed for quick and easy priming.

A rifleman simply had to set a percussion cap in the tray under the hammer, and the gun would do the rest. With this development, manufacturers started making paper cartridges, which consisted of a bullet and a pre-measured portion of powder, wrapped in a paper shell.

This design was useful for militaries, as well as for hunters who didn’t want to juggle a powder horn and a bullet pouch. But it still wasn’t enough to develop reliable auto-loading firearms, since paper cartridges would tear if they were forced through any kind of mechanism.

Later in the 1800s, manufacturers like Colt started building one-piece brass cartridges, with built-in primers and pre-measured powder. This made it easier to load your gun since all the components of your shot were included in a single cartridge. And it meant you could fire repeatedly, without the need to replace your percussion cap after each shot.

So what does a modern cartridge look like? It’s composed of four parts:

This design allowed for standardization, leading to the development of the Colt .45, the US Army’s famous repeater carbine, and later on the Colt 1911.

These revolvers and semi-automatic guns required precise machining, and the development of standard cartridges enabled the existence of modern guns as we know them. However, not all guns fire the same way.

During the development of standard cartridges, there were some disagreements about how to integrate the primer. Two methods developed, and both are still in use today: centerfire and rimfire. Let’s take a look at how they work.

Key Difference Between Rimfire and Centerfire

This comes down to the way your cartridge is constructed, and the way your gun needs to work in response to that.

A rimfire cartridge has a base that’s filled relatively evenly with priming powder. The rim at the bottom of the cartridge is designed to be crushed, which will ignite the priming powder, setting off the main charge.

Either way, a striker needs to ignite the cartridge. This striker called a “firing pin”, can be fired by a variety of means, depending on the design of your gun. The firing pin on a centerfire rifle needs to be finely tuned to strike in the exact center of the chamber. On the other hand, a rimfire gun’s firing pin can strike at any point on the perimeter of the cartridge.

But what’s the advantage of one type of round versus another?

When to Use Rimfire

Rimfire rounds are typically small. This is necessary for reasons we’ll go into later, but it means that your rimfire options are essentially limited to .22 LR, .22 short, and the .17 family of cartridges. There are some 30 caliber British garden guns available in this class as well.

The most obvious use of rimfire ammunition is for shooting pests. Whether you’re dealing with rats, rabbits, raccoons, or even foxes, a .22 rifle will make short work of bothersome vermin. A shotshell in this caliber is only useful in short ranges, but it’s still a good choice for getting rid of snakes, and other elusive pests.

Many rifle enthusiasts prefer to practice with a .22. Why?

Simply put, .22 ammo is cheaper than any other type of ammunition on the market. You can fire off several magazines for the price of a cup of coffee, which makes it an ideal choice for target practice.

Best of all, firing a .22 rifle requires all the same skills you need to manage a larger, high-powered rifle. Want to get some practice in before you go deer hunting? A .22 rifle will pay for itself in a single season in the cost of practice rounds.

Not to mention, plinking is fun. Set up a set of spinners, and see if you can resist the enjoyment of ringing one plate after another. We guarantee you’ll have a blast.

The .22 should not be underrated as a home defense round. While it’s less effective than a larger cartridge or a home defense shotgun, it also has less recoil, which makes it easy to fire a series of shots quickly without getting pushed off target by a heavier gun’s intense kick.

There are a number of .22 caliber concealed-carry guns available. Be careful, though. If you’re at pistol range, you may want something with a little more stopping power than a .22.

Pros and Cons of Rimfire

As you can imagine, there are some benefits to rimfire ammunition, as well as some drawbacks. Here are the most important ones:

When to Use Centerfire

Centerfire ammunition is almost always more powerful than rimfire. This is because, as we’ve already mentioned, rimfire guns are so much cheaper. So any gun that can be manufactured in rimfire will tend to be very cost-effective.

Nonetheless, centerfire cartridges dominate the market in anything larger than a .22 LR. Why is that?

Because the centerfire ignites from the center, instead of from one side, it has a balanced discharge. In anything larger than a .22, this is critical, since an uneven discharge can send your bullet careening wildly off-target for no apparent reason.

Here are some common applications of centerfire ammo.

Popular centerfire options include the .308, .300, .30-06, 6.5 Creedmoor, and .300 Win. Mag., all of which are excellent choices for hunting ammo. They’re all legal for hunting big and medium game in all states, so you’ll never be stuck sitting at home in the middle of deer season.

If you’re thinking of reloading your own cartridges, you’ll want to use a gun that shoots centerfire ammo. Reloading rimfire ammo is nearly impossible and is a dangerous choice for anyone who isn’t a qualified gunsmith.

On the other hand, centerfire cartridges are easy to reload. For just pennies on the dollar, you can have fresh ammo for your next trip to the range – provided you’re willing to put in the time.

The AR-15 takes centerfire .223 cartridges, and it’s the most popular home defense gun in the nation. Needless to say, there’s no reason you shouldn’t use a centerfire rifle for home defense. Just make sure it’s got the right length and ergonomics for indoor use.

Unless you need to carry a very skinny, very lightweight .22 pistol to fit your concealed carry gun under tight clothing, you’ll get better self-defense performance with a heavier duty pistol. The 9mm, for example, is a reliable, low-recoil cartridge that’s used by many law enforcement agencies, as well as the US military. And it’s a centerfire cartridge.

Pros and Cons of Centerfire

Just like rimfire ammo, centerfire cartridges come with their own good qualities, as well as their own downsides. Here’s what you should keep in mind:

Check out the other ammunition related articles put together by the expert team here at Guns & Safety Reviews;

Winchester Gun Safe - How They Are Different From Traditional Gun Safes?